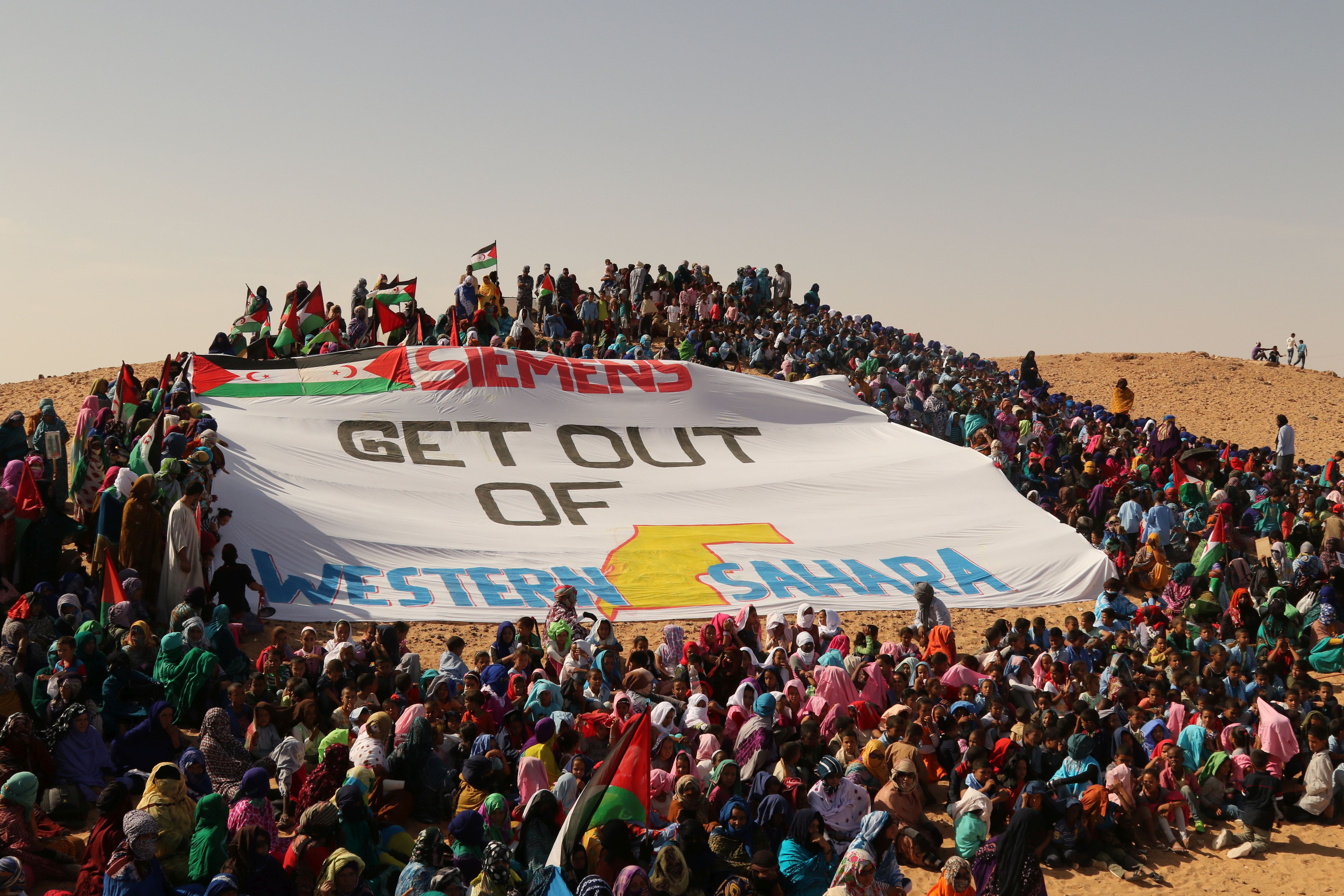 "We condemn Siemens Gamesa for its lack of respect for basic human rights", stated Western Sahara Resource Watch, calling on investors to terminate ongoing engagement processes and exclude the company from their portfolios. The company has yet again signed a large contract for what it refers to as "Southern Morocco".

More than eight years have passed since Siemens first issued a press release regarding a contract for construction of energy infrastructure in occupied Western Sahara. The company then described the territory as "Southern Morocco".

Now, it has done that again. In a press release [or download] of early September, Siemens Gamesa Renewable Energy (SGRE) announced that it had received a massive new order for the supply of windmills to a project in the territory operated by a company owned by the Moroccan king. And just as in 2012, SGRE interprets Western Sahara as being an integral part of Morocco.

"For eight years, owners of Siemens have tried to convince the company to support principles of international law and respect the Saharawi people's right to self-determination. This latest contract and press release regretfully illustrate that the company has shown no improvement in their business practice or in the understanding that they are operating on occupied land, outside of Morocco's international borders", stated Sylvia Valentin, chair of Western Sahara Resource Watch.

The new agreement covers the "supply, transport, installation, commissioning and testing of 87 units of the SG 3.4-132 wind turbine and a 5-year service agreement" for what the company refers to as "the Boujdour wind farm, located in the South of Morocco".

Boujdour is a town located along the mid-coast of the part of Western Sahara that has been under Morocco's military occupation since 1975. Since Siemens first engaged in the occupied territory, the Court of Justice has in four rulings concluded that Western Sahara and Morocco are 'separate and distinct' territories, and that trade deals with Morocco cannot apply to Western Sahara.

"We urge all investors who have tried to engage Siemens on the matter to exclude the company. After the controversy of Siemens' supplies to Crimea, WSRW had hoped that the company would have shown an increased sensitivity to human rights and international law. But this latest contract and the framing of the territory's status demonstrate that the company has not moved an inch further in its understanding of corporate responsibility. Time has come for the global investors to halt further engagement processes with Siemens, and divest. There is a fundamental flaw in the company's approach to the UNGP, human rights and due diligence. International banks and investors that are guided by human rights guidelines, cannot place money in a company that is fundamentally not bothered by such concerns", stated Valentin. WSRW is aware that several investors have been requesting Siemens for answers on the matter. The issue has been addressed in several shareholder AGMs and has been subject of WSRW's correspondence with the firm for seven years.

Siemens has never obtained permission from the Saharawi people to operate in Western Sahara, but instead claims to be "consulting" local stakeholders, which are all Moroccan bodies on the territory.

"Since day 1, SGRE has exclusively engaged with Morocco. We strongly condemn Siemens for so openly supporting Morocco's annexation both in terms of developing infrastructure on occupied land, and for offering political recognition of Morocco's illegal claims. Investors should call Siemens' bluff. The company has shown no intention to respect the Saharawis rights. After all these years of investor engagement, it is clear that the company still has no idea of which country they are investing in and that the people of Western Sahara has to consent. Its argumentation about 'benefits' to Western Sahara is an insult to the Saharawis and has been judged as irrelevant by the Court of Justice of the EU (Art.106)", stated Valentin.

The Boujdour wind farm is part of Morocco's Integrated Wind Power Project, foreseeing in the installation of 850 MW of wind power across five parks. Three of those parks are in Morocco proper, while two are in occupied Western Sahara: in Boujdour and in Tiskrad, near El Aaiún. These two parks will deliver half of the Project's planned capacity. Originally, the Boujdour plant was conceptualised to have a capacity of 100 MW, while Tiskrad was put at 300 MW. It would appear that that has been turned around, as the Boujdour farm will have a total capacity of 300 MW.

The construction of the park is in the hands of Italy's Enel Green Power in partnership with the Nareva Holding - a Moroccan energy company that is wholly owned by the Moroccan king.

Since 2015, the EU Court of Justice has repeatedly ruled that Morocco has no sovereignty over Western Sahara, nor any international mandate to administer it. The Research Services of the Bundestag qualified Western Sahara as an occupied territory and deemed Morocco's settlement policy in the territory as substantiating a violation of the Geneva Convention. As such, International Humanitarian Law applies there. It is this situation that Siemens Gamesa is contributing to maintain.

Literally every wind farm in occupied Western Sahara is equipped with wind mills from Siemens. In spite of ever more questions from shareholders, the German engineering company keeps dodging questions on the legality of its activities in the territory.