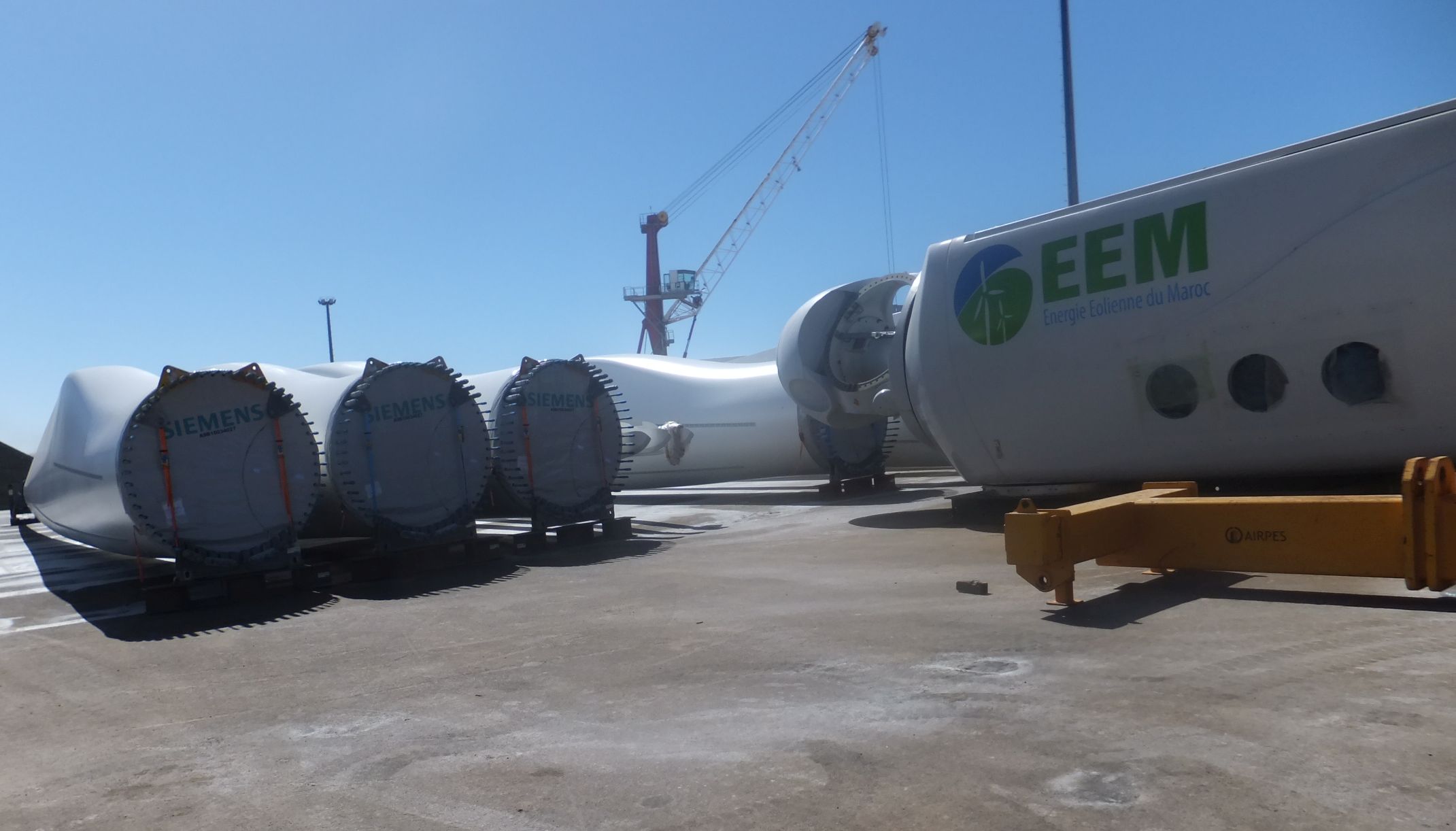 To convince Morocco to recognise Israel, Trump not only recognised Morocco's claim to Western Sahara, but allegedly also promised investments in the Moroccan king's personal energy firm which operates in the occupied land with Siemens.

Above: Siemens windmill parts seen arriving Western Sahara in 2013 together with equipment from EEM, a subsidiary of the Moroccan king's personal energy company Nareva. The latter - and therefore possibly its European partners - is said to be one of the beneficiaries of the package that Trump signed as part of undermining the Saharawi people's rights. Both Siemens and Trump refer to the territory of Western Sahara as part of Morocco, in disrespect of international law.

Yesterday, 10 December - Human Rights Day, the outgoing president of the United States unilaterally announced that he had signed a proclamation in support of Morocco's self-proclaimed sovereignty over Western Sahara. The text of the proclamation made clear that there are already plans to open a USA consulate in Dakhla, located along the mid-coast of the part of Western Sahara that Morocco's has illegally occupied since 1975. The purpose of the consulate would be "to promote economic and business opportunities".

Reports are emerging that business opportunities were part of the deal to get Morocco to keep its end of the bargain, which was to formally normalize diplomatic relations with Israel, thereby throwing the Palestinians under the bus.

The New York Times yesterday reported "that the Trump administration was willing to help facilitate as much as $3 billion in investments, much of that earmarked for Moroccan banks, hotels and a renewable energy company owned by the king" in order to get the king of Morocco to make a move that would go against the widespread pro-Palestinian sentiments among his people.

The mentioned renewable energy company is Nareva, which is indeed owned by the king of Morocco. The company holds practically all of the wind parks in Western Sahara in its portfolio. Nareva's partner in these farms is Siemens Gamesa Renewable Energy, responsible for delivering the turbines for the parks. Another partner for developing renewable infrastructure on occupied land is Italy's Enel Green Power, which will next year kick off construction work on a 300 MW wind farm in occupied Western Sahara.

Western Sahara Resource Watch (WSRW) has on numerous occasions pointed out that the king's personal investments in Western Sahara through the renewable energy industry are increasingly complicating conflict resolution. WSRW has written to Nareva regarding its concerns, but has never obtained a response.

"For their projects on occupied land, Siemens and Enel are in cahoots with a company that is not only owned by the king of the occupying regime - but that is now also reported to be reaping the benefits of a move that has sold-out the international legal order, and both the peoples of Palestine and Western Sahara", says Tim Sauer from WSRW in Germany.

As late as in September 2020, Siemens referred to the territory as part of Morocco, thus siding with the Trump's interpretation of international law. Trump has also hinted of recognising Russian claims to Crimea, but on that occupation, Siemens has different position from Trump.

"The effort was to be coordinated by the United States International Development Finance Corporation", the NY Times writes. "A senior Trump administration official confirmed on Thursday that the development office was considering investments worth up to $3 billion in Morocco over three years, but said they were not linked to the reconciliation with Israel."

Within hours after Trump's announcement, the news emerged that the USA will sell at least four sophisticated aerial drones to Morocco. While U.S. laws prohibit such weapon sales to invading armies, Trump's unilateral decision to back Morocco's sovereignty claim over Western Sahara reframes the conflict as a civil war, and different rules apply.