Support us
Morocco intervenes militarily to re-open its plunder corridor 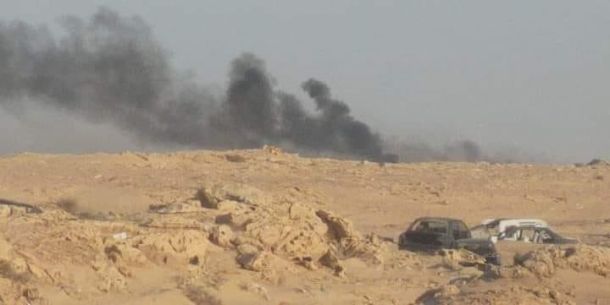 Tension in Western Sahara has not been this high for years.

The picture above is shot this morning near Guerguerat. It is unclear to WSRW what the picture depicts. From what WSRW deduces, it must be a little settlement erected by civilian Saharawis that is on fire.

This morning, Morocco militarily intervened in the area called Guerguerat in the south-west corner of Western Sahara. Reports from the ground have explained that the Moroccan military forcibly reopened the trade route from Western Sahara to Mauritania, which has been blocked by Saharawi protesters since 20 October.

Morocco is using Guerguerat to export products from Western Sahara that are then transiting through the port of Nouadhibou, Mauritania. The days following the start of the Saharawi blockade of the trading point, trucks full of fisheries products were observed queuing to cross.

“The trade-route in Guerguerat symbolises the impunity in which Morocco can continue violating Saharawi rights, in particular their right to self-determination”, Sylvia Valentin, chair of Western Sahara Resource Watch stated.

“The UN mission that has been in the territory for nearly three decades, has yet to fulfil its single task: organising a referendum that allows Saharawis to choose the status of their land and its resources. In the meantime, Morocco’s exploitation of Western Sahara’s resources and export via Guerguerat is an offense to the rule of law and to the spirit of the peace accords. WSRW urges the parties to immediately abstain from use of military means, and to constructively immediately find a political solution to the conflict that fulfils the Saharawi people's right to self-determination and leads to an end to the occupation. Foreign governments and companies should support the peace process by refraining from supporting Morocco’s baseless claims to the territory through trade that international courts find illegal”, stated Valentin.

The current protest of Saharawi civilians kicked off on 20 October. The protesters demand that the UN mission finally implements its mandate and organises a referendum. Since 6 November, reports have started to emerge that the Moroccan troops deployed in Western Sahara were moving south in the direction of Guerguerat. On 8 November, the Polisario announced that it remained committed to the ceasefire agreement, but that it would “take the necessary action” to protect Saharawi civilians. From what WSRW understands, none of the protesting civilians have been injured in today’s events.

The EU Court of Justice has in four rulings concluded that the EU’s agreements with Morocco - including the trade agreement - cannot be applied to Western Sahara, as it is separate and distinct from any country in the world, including Morocco. The EU Court as such echoed the findings of the International Court of Justice, which concluded that Morocco had no sovereignty over Western Sahara and that the people of the territory had a right to self-determination.

Polisario refers to Morocco’s use of Guerguerat as “illegal” and that claim is substantiated.  When Morocco and Polisario entered into the ceasefire agreement in 1988, and the so-called Military Agreement No 1 in 1997, the trading point was not there. Eight years later, the EU started talks with Morocco for trade from Morocco and Western Sahara, and Morocco’s exports from the territory have boomed.

In 2001, Morocco started the construction of the asphalted road across the buffer-strip in Guerguerat. The UN condemned the undertaking, stating it “involved activities that could be in violation of the ceasefire agreement”, but never acted on the “commercial and civilian traffic” in the area – as it has been described in reports by the UN Secretary General. In 2017, tensions escalated again.

One Polisario official wrote 13 November that the Moroccan army “today opened three new breaches in Guerguerat in a flagrant violation of the ceasefire signed between the two parties to the conflict. In response to this blatant attack, forces of the Sahrawi People's Liberation Army responded to this aggression, using the right to defend the unarmed Sahrawi civilians who have been protesting in Guerguerat for several weeks. The Sahrawi People's Liberation Army intervention was able to insure the safety and withdrawal of these civilian population.”

Morocco’s possible opening of further breaches in the wall, in violation of the ceasefire agreement, has not been confirmed by other sources. Algerian radio has just published a video on Twitter showing an incident on the ground.

“The Royal Armed Forces (FAR) set up, on the night of Thursday to Friday, a security cordon in order to secure the flow of goods and people across the Guerguarate buffer zone, linking Morocco to Mauritania", a statement from the General Staff of the Royal Armed Forces said on Friday. A statement was also published by the Moroccan Ministry of Foreign Affairs.

Polisario issued a statement on 8 November 2020 regarding Morocco’s use of Guerguerat. A further compilation of statements from the two parties to the conflict relating to the Guerguerat tension can be found on the website of Center for Studies on Western Sahara, at the University of Santiago de Compostela.

On 8 November, protesters let holders of Mauritanians passports that were stranded at the blockade pass through to Mauritania.

WSRW wrote 31 October that trade going the other direction, from Mauritania to the EU, circumvented the roadblock by landing cargo in Dakhla.