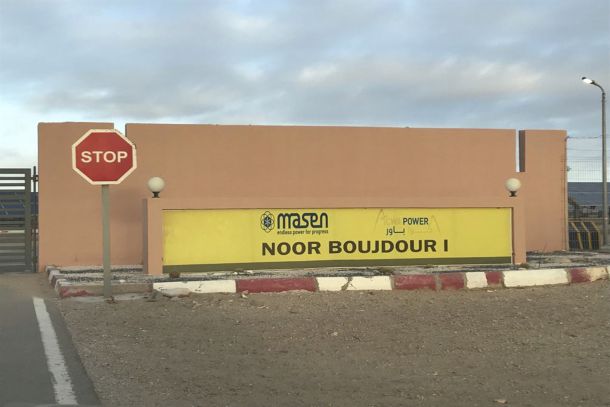 Swedish company Azelio will not clarify whether its deal with the Moroccan Agency for Sustainable Energy also covers renewable projects in occupied Western Sahara. The details appear in a WSRW report published today.

Above: Just outside of Western Sahara’s capital city El Aaiún, a large solar plant has been erected for the Moroccan Agency for Sustainable Energy (MASEN), a partner of Swedish company Azelio AB. The latter does not wish to answer questions on whether it has assisted in the development of MASEN’s projects on occupied land.

In recent years, the Swedish solar company Azelio AB has developed a tight partnership with the Moroccan Agency for Sustainable Energy (MASEN), which in turn is responsible for the large-scale development of energy infrastructure on occupied land in Western Sahara.

But does Azelio's partnership with MASEN extend into the occupied territory? That is a question that the company avoids answering. In August, it sent the following evasive reponse to WSRW: “Our purpose is to store solar energy to provide access to renewable energy in places that currently lack electricity grids or where access grid access is poor. These areas are located mainly in the earth’s sun belt. In these regions, we collaborate with established organizations where we act as a technology supplier. We do maintain close contact with Swedish government organizations in order to listen to government recommendations. Those recommendations we follow.”

So far, Azelio's technology - which specializes in storage of renewable energy from e.g. solar and wind power so as to make it available all hours of the day as electricity and heat - has been successfully installed at the solar plant in Ouarzazate, in Morocco proper. The latest round of adding capacity to that particular plant was tied into a single tender with the construction of the first phases of solar plants in Boujdour and El Aaiún in Western Sahara. The tender for the work on all three plants - referred to as the Noor PV I project - was won by ACWA Power from Saudi Arabia.

Given the practice of tendering projects in the occupied territory in combination with projects in Morocco proper, there is a need to get clarifications on the scope of Azelio's deal with MASEN.

Azelio's ties with MASEN seem to run deep. “We have an ambitious development and commercialization of our technology, where Masen’s profound experience in renewable energy is of great value. Being present on one of the world’s leading arenas for renewable energy marks a big step for Azelio and is the platform from where we take the next step in becoming a global industrial player”, Jonas Eklind, CEO of Azelio, told. Meanwhile, MASEN’s Director of Research and Development, Industrial Integration has been sitting on the board of Azelio since 2018.

In early 2019, Azelio struck a joint technical and business development agreement with MASEN to carry out a “large-scale verification process” by the end of that year, followed by Azelio’s first market installation in 2020. That target has been met: during the fourth quarter of 2019, Azelio completed its verification project with MASEN at the Noor Ouarzazate Solar Power Station and the first electricity has been produced by the end of the year. It was announced that a verification of the storage was to be initiated during the first quarter of 2020. The aim of the verification project was to generate data showing the technology's performance levels in a real-world environment. This means that the technology will become bankable since Azelio's customers – read: Masen – will be able to use this data to seek funding for projects involving Azelio's technology.

Azelio is headquartered in Gothenburg and has production facilities in Uddevalla, development centres in Gothenburg and Åmål, as well as international offices in China, Spain and Morocco. The company was established as Cleanenergy in 2008, changed its name to Azelio in June 2018.

On 5 November 2020, the Norwegian certification company DNV GL announced it would phase out its participation in a wind park in the occupied territory.

Saharawi refugees protested against the Swiss-Swedish company's contract for the Moroccan government on occupied land.

The Swiss-Swedish technological giant ABB got contracted to build the infrastructure that is set to connect a new wind farm in occupied Western Sahara to Morocco's national electricity grid.