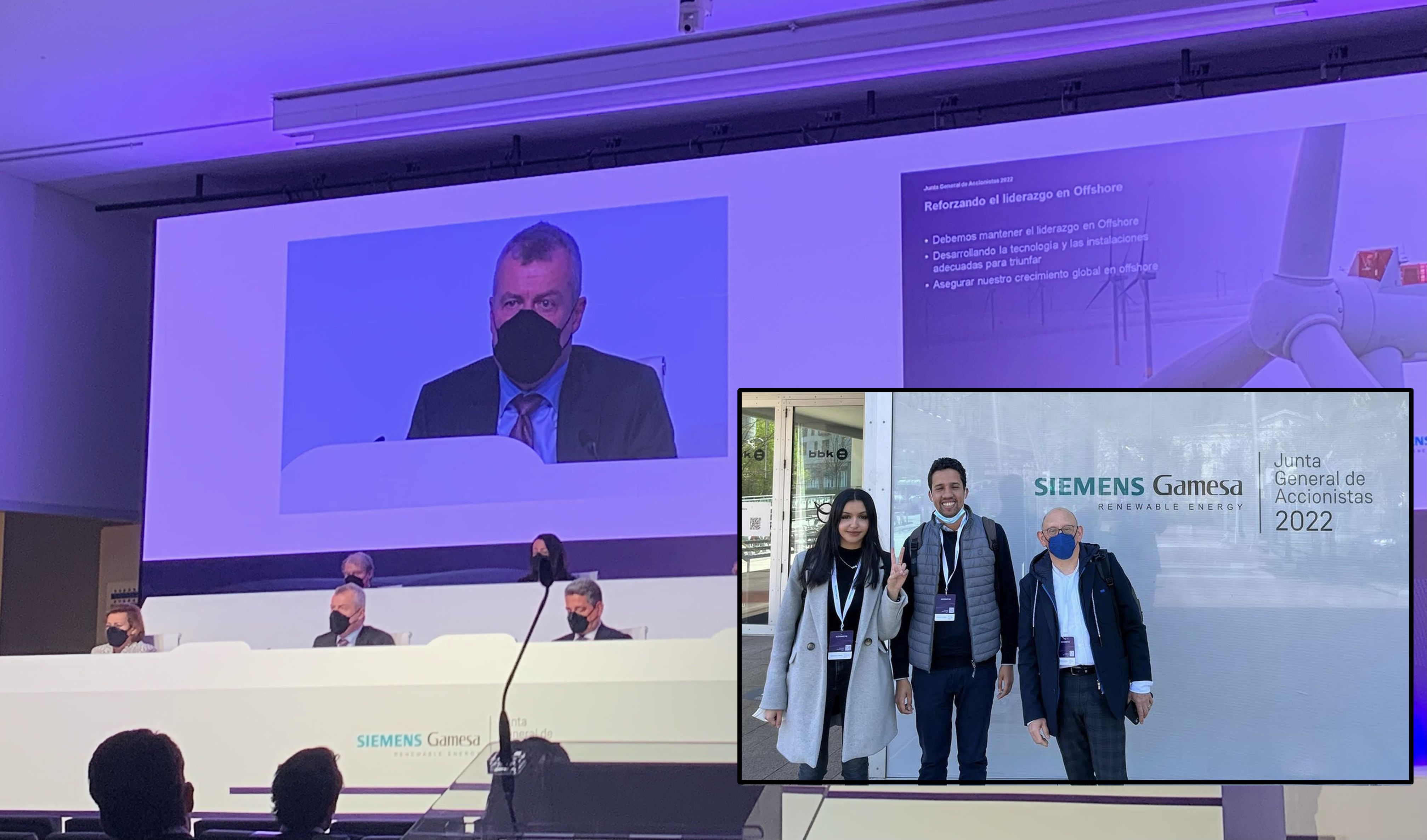 Two Saharawis and Western Sahara Resource Watch took the floor during the Annual General Meeting of Siemens Gamesa yesterday in Bilbao, Spain. The Spanish company is installing energy infrastructure for the Moroccan government in occupied Western Sahara. In 2021, the biggest project to date began, with the controversial Boujdour farm, in partnership with the Moroccan king's personal company.

Hassana Aalia, a Saharawi with political asylum in Spain, explained during the meeting how he has been sentenced (in absentia) to life in prison by a Moroccan military court for having taken part in a Saharawi protest in 2010.

“To me, it is incomprehensible how a company like Siemens Gamesa, can take part in Morocco’s attempts to cement its occupation of my homeland, and even claim that your projects are somehow to our benefit - that is not for Siemens Gamesa to decide”, Aalia stated to the company management.

“Maybe you present here today have seen pictures of the times we have demonstrated against the company, or even a protest today at the doors of this same AGM. So far both Siemens Gamesa and Siemens Energy's only response has been silence”, stated Nayua Jatri Aduh, who is a Saharawi, born in exile, underlining that no one had granted Siemens Gamesa permission to operate on their land.

While the two Saharawis were protesting before the company management at the AGM, a group of Saharawis had gathered in protest in front of the company headquarters. The Saharawi protests were today also covered by Spanish newspapers El público and Hispanidad.

SGRE's CEO Jochen Eickholt responded that the company fully complies with “the applicable law”. However, after 10 years of writing to the Siemens Gamesa, Siemens Energy and Siemens AG, WSRW has not been able to find out what it meant by that.

Jesús Garay, representing Western Sahara Resource Watch, asked a number of questions, none of which were responded to:

"Western Sahara Resource Watch calls on Siemens Gamesa management to clarify the laws of which country the company claims it is complying with when operating in the occupied part of the Non-Self-Governing Territory of Western Sahara, and to explain why it is applying the laws of that country.

In addition, Siemens Gamesa has referred on several occasions to a "revised external legal opinion in February 2020" that would have "reaffirmed SGRE's position on the compliance of its activities in Western Sahara with the applicable law".

a) Will Siemens Gamesa make this legal opinion available to the public, including the people of Western Sahara? If not, why not?
b) Can Siemens Gamesa explain what legal framework it refers to by "applicable law"?
c) Who is the author of the legal opinion?

3) Siemens Gamesa informed WSRW that "As regards the right of self-determination of peoples, the installation and operation of a wind farm does not prevent the local population from enjoying this right (...)".
a) The CJEU has stressed the need for commercial agreements to be approved by the people of Western Sahara, not by the "local population", most of whom do not belong to the people of Western Sahara. Why does Siemens Gamesa refer to the local population?
b) According to the above-mentioned ECJ judgment, "the agreement in question raises not only trade or customs issues, but also a specific territorial issue" and states that representation of the Saharawi people by the Polisario Front is necessary for such agreements in order to safeguard that people's right to self-determination [T-279/19, ECLI:EU:T:2021:639, Rn. 207]. Why, for Siemens Gamesa, is this not necessary for a wind farm project?
c) Which body of law, according to SGRE, establishes that it is the "population" of a non-self-governing territory that holds the right of self-determination of the people of that same territory?
d) If SGRE agrees that it is the people of the non-self-governing territory who have the right to self-determination, why does it argue by referring to the population of a non-self-governing territory who are mainly Moroccan settlers?

4) Siemens Gamesa states that it supports the position of the UN "which has consistently called on the parties involved to reach a mutually acceptable political solution". Can SGRE explain how entering into commercial agreements with a company owned by one of the parties to the conflict - for the development of infrastructure in the conflict zone - helps to encourage that party to find a solution?"

The complete interventions of Hassana Aalia, Nayua Jatri Aduh and Jesús Garay can be downloaded here.

So, ladies and gentlemen, in relation to the questions raised by Ms Hadu, Mr Aalia and Mr Garay, we would like to respond as follows. Of course, with respect to the questions and statements with regard to Siemens Energy or Siemens, it is not up to us to speak on their behalf. Any questions, please, should be addressed to them, directly. SGRE has a profound commitment to the UN Global Compact, the UN Guiding Principles of Business and Human Rights and the OECD Guidelines. We apply them to all operations in every location worldwide, without exception, including the projects in the Western Sahara, such as the Boujdour project. In February 20, we conducted an update of our external legal assessment which once again confirmed our position that all SGRE duties [? inaudible] in Western Sahara fully comply with the applicable law.

SGRE’s scope of work, which is limited to the installation and servicing of wind turbines does not infringe the right to self-determination as established by international public law. Our projects have no impact on access to basic services or institutions and do not destroy or erode the existing infrastructure. Nor do they result in a depletion of natural resources. The capture and the use of wind power by the equipment which is provided by us is not against the interest of any people in the communities in which we operate. On the contrary, random community benefit from access to electricity generated by SGRE green technologies. Furthermore, SGRE follows its employment policy to hire local workforce for its projects whenever that is possible. Finally, SGRE has also developed local programs, focussing on water access systems, local health and also educational projects. We also took careful note of the judgment of the European Court of Justice of September 29 in the year 2021 on the fisheries agreement. We are aware that this judgment has been appealed to by the European Commission and the European Council. We, together with the key-stakeholders such as our customers and suppliers, await the appeal judgment of the European Court of Justice to derive conclusions for further action.

To conclude, we fully support the position of the international community and the United Nations, which express their hope for a fair and mutually acceptable solution of the issues of the Western Sahara. Thank you.