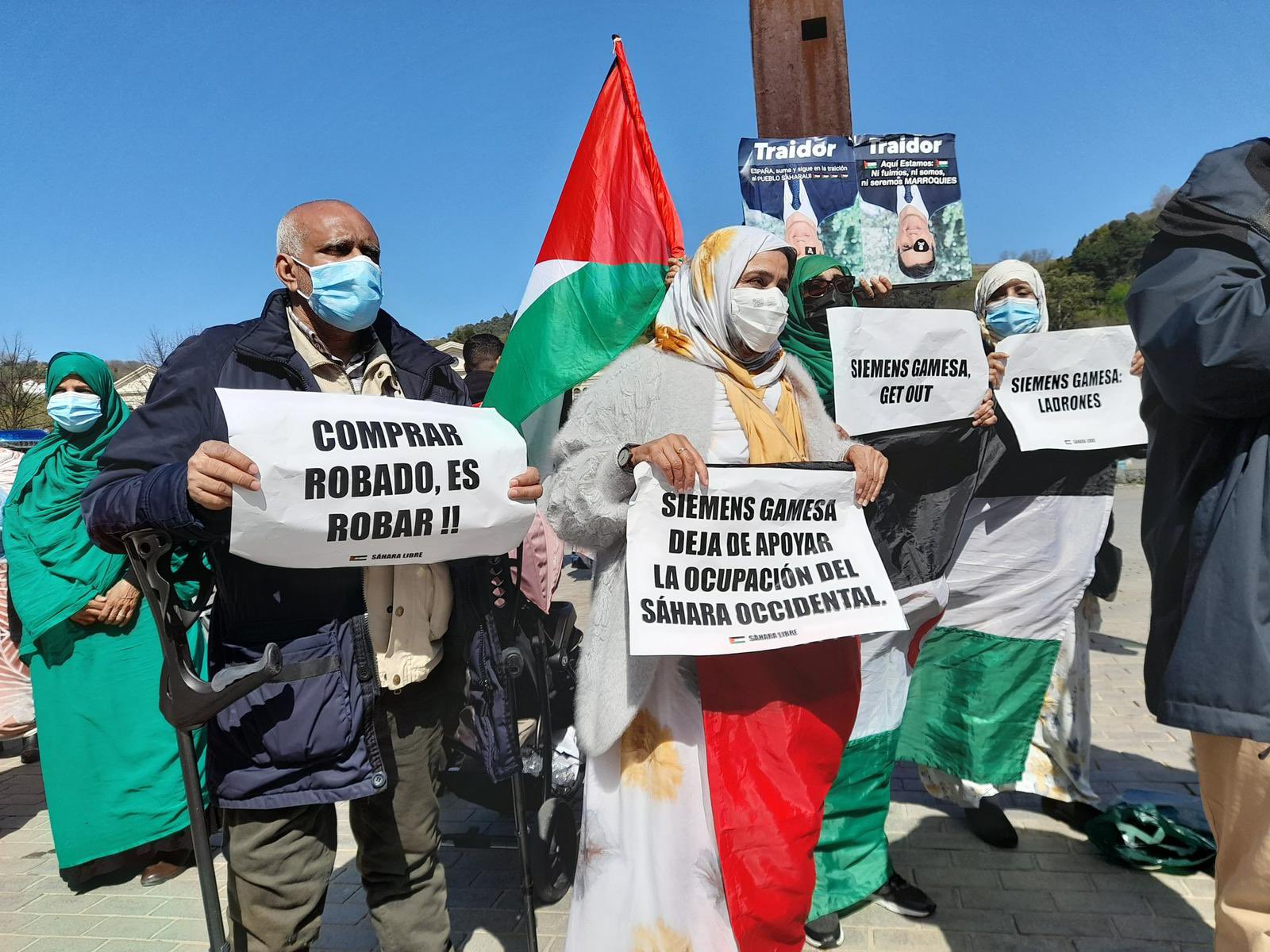 Photo: Demonstrators in front of Siemens Gamesa's AGM on 24 March 2022. Picture by Western Sahara is not for Sale.

"Siemens Gamesa still cannot seem to understand which country it is operating in. It appears that Siemens Gamesa does not care much about basic principles of international law. After a decade of protests against its energy projects with the Moroccan king in Western Sahara, the company can not even state the name of the country where the operations are taking place”, stated Sara Eyckmans, coordinator of Western Sahara Resource Watch.

Very recently, probably at one point in February or March 2022, Siemens Gamesa yet again chose to refer to the territory as being in Morocco. On its website, the company stated that the location where it undertakes a project with a Moroccan NGO is "Boujdour, Morocco" [or download].

“With this Forests we planted 808 trees in Boujdour, Morocco with our partner HAF following our goal to create the Forests of Siemens Gamesa all over the world"; the company proudly announced.

HAF - or High Atlas Foundation - is a Moroccan NGO that explicitly states that it works politically for the interest of Morocco.

“My people is not interested in your partnership with Moroccan organizations to spread propaganda that my country is in fact part of Morocco”, Saharawi activist Nayua Jatri Aduh stated at the Siemens Gamesa AGM on 24 March 2022, in relation to the tree planting in “Boujdour, Morocco”.

Siemens Gamesa stated at its Annual Meeting on 24 March 2022 that it supports the UN efforts, but the company still just can't seem to get the geography right. The Siemens Gamesa statement on the alleged geographical location of Boujdour follows a trend in which all references to Western Sahara are systematically ignored.

The company's consistent references to the territory as "Morocco" occur in total disregard of UN terminology and five rulings from the Court of Justice of the EU.

All references to the fact that the company has supplied anything to Western Sahara are completely removed from all public reports, including in the Communication on Progress reports to the UN Global Compact, the latest of which was published in April 2021.

Siemens Gamesa often refers to its undisclosed legal assessment that supposedly qualifies its activities in Western Sahara as compliant with “applicable laws”, yet it systematically evades all questions as to which country's laws it claims to be applicable in Western Sahara.

The last time that happened was at the company's Annual Meeting on 24 March 2022.